← more from
Gentle Reminder
Get fresh music recommendations delivered to your inbox every Friday. 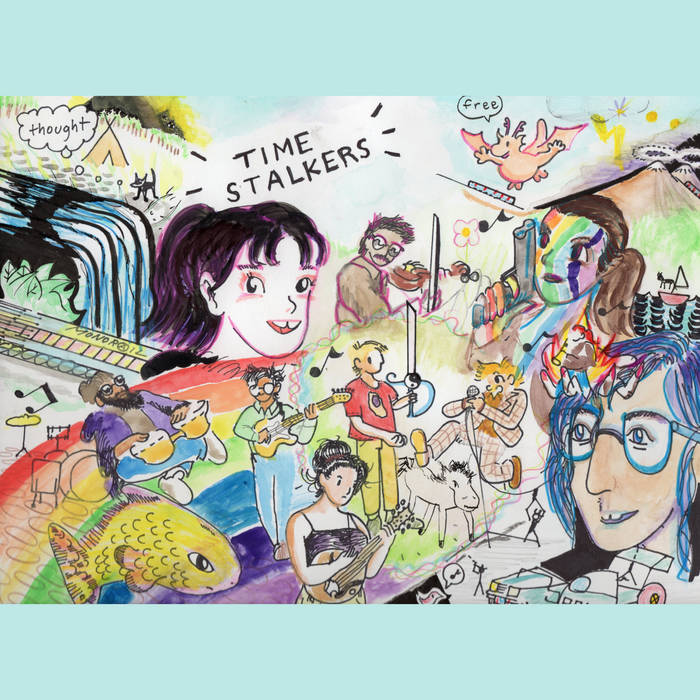 Time Stalkers is a nine-piece ensemble based in New York City playing songs by "the Best Indie Rock Songwriter You’ve (Probably) Never Heard Of," according to Bandcamp.

The band practiced and recorded their self-titled debut album at the Brooklyn punk house known as The Dump. The album is an essential addition to the greatest catalog in the Tri-State. The multiplicity of the instrumentation adds a lightness to Moloney's songs, giving them a lift to match the spiritual & community positivity yearned for and achieved lyrically.

Time Stalkers established themselves as the preeminent live act on NYC's bustling live music circuit by playing shows at photography studios, thrift stores, and shuttered arts space The Glove. They shared bills with Jeffrey Lewis, Palberta, Joe Pera, Lucy, Water from Your Eyes, Emily Yacina, Aaron Maine, Kate Mohanty, and many more. "I view this band as a serendipitous gift that formed because of mutual friendship and love of music, with each member complementing each other and enhancing the whole," Moloney says.


Will Moloney on "General Strike":
"The song was calling for a general strike 14 months ago for two main reasons: 1) Because there needs to be a reevaluation of our economic system and how it treats a certain class of human beings poorly, and 2) Because this system assumes the environment is an endless resource of energy that can be infinitely mined and disposed of without serious ecological consequences.

Though the conceit of the song—a halt to modern capitalism—seemed quixotic and insurmountable then, we are now seeing what many of us already had a sense of: that our economy is mostly concerned with frivolous, non-essential jobs that only existed to make rich people richer.

We are now in a kind of 'general strike' that we didn't even ask for, but, in many ways, need. This historical moment could be extremely useful to humanity as a whole if we seize the opportunity to demand housing, food, and medical care for everyone, regardless of political identity affiliation. These are very basic things that every human being knows should be obtainable but aren’t because of this terribly unjust, superfluous, and violent god most people worship called 'the market.'

This song is meant to inspire people to come together in solidarity and plan a better way to run the world. This song doesn't have the answers, but it might spark a productive idea in a person. It also exists as a song that people will either enjoy or not enjoy because of aesthetic reasons, and that's okay because it's just a song at the end of the day.

I am conscious of the fact that my voice is from my limited perspective and as a result may not resonate with everyone who would benefit from its basic message, which is why I'm thankful to Kurt for providing a different shade and perspective and refracting and enhancing the theme with his awesome freestyle. As the recording reaches its end, there is a spontaneous chant of 'Strike!' from the band. We must be grateful to Van for bringing us back to the complex reality of the worker's struggle, reminding us that efforts to organize are serious and not as easy as playing a song with your friends—Van coming from a particular theoretical understanding of history informed by Lenin, Mao, and Ho Chi Minh, that will lead to a fruitful dialectic between the band members off the record. Ultimately, we all must learn from and listen to each other to change the world—even, and perhaps especially, to the radical communists throughout history."

Time Stalkers is a nine-piece ensemble based in New York.

Bandcamp Daily  your guide to the world of Bandcamp

Little Brother joins the show to discuss their beautiful journey, plus tunes from Fat Tony